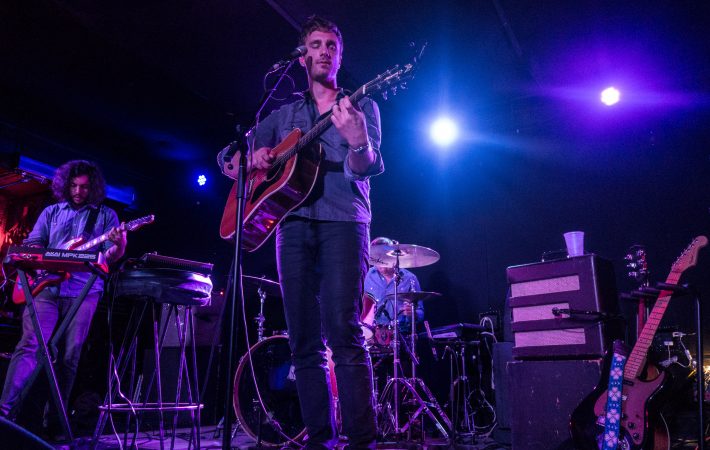 As per their own promise on Facebook: “We try to make our hometown shows count. Don’t miss this one!” Howard delivered yesterday at Mercury Lounge. While I was particularly fond of their mellow, slowly building and immensely catchy Money Can’t Buy, which also ultimately lead to attending this show, I enjoyed the whole set. And so did my fellow attendees. I’ve rarely seen such a supporting, fiery AND chatty crowd! I wasn’t sure what the cause was. Early Thursday night at the Lower East Side? Mercury Lounge? Howard – the man and the band? I was puzzled as to how little some paid attention!

There for sure WAS a lot of friends and family and I overheard a couple who could have been the parents of one of the band members exclaiming in utter disbelief and almost frightened: “There’s standing room only?!” Yes, duh.

So, this was the set-up, yet the four on stage did not falter. Howard Feibusch (vocals, guitar), Myles Heff (bass), Chris Holdridge (drums) and Alex Chakour (synth, guitar) were performing beautifully and delivered one extraordinary show – no problem with so much pleasing material to choose from! Howard Feibusch brought three guitars (one acoustic and two electric) and exchanged them for each song as best suited.

Chris Holdridge seemed to be the crowd favorite with all his drum moves – but credit where credit is due. In their finest moments, and there were plenty, Howard (the band) reminded me of Radiohead – not an easy feat, and not at least because of the rad percussions. To be also clear, Howard Feibush does not sport Thom Yorke’s falsetto but an incredibly pleasing Tenor to Baritone voice. To be honest, his vocals caught me first and foremost.

It was all in all a heartfelt and friendly show with moms (?) taking photos on their iPads (something you still very rarely see at shows) and the crowd asking for an “encore” and not letting go. Before that though, Howard played their song with maybe the most hit potential Money Can’t Buy with super cool hand-clapping (want to pint it to my collection) and Howard Feibush encouraged us to chime in with a “don’t be shy” and we happily did.