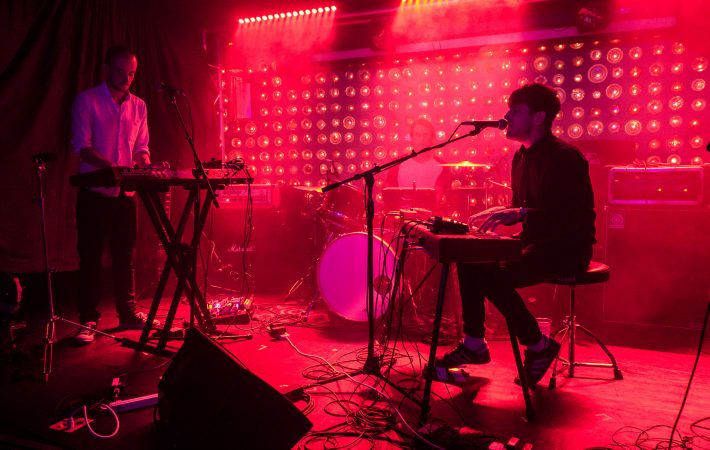 For a while now, I’ve been listening to Boxed In‘s superb self-titled debut album and wanted to see them already for SXSW, yet had to wait until last Thursday, to finally catch this UK four piece led by Oli Bayston.

Boxed In played two shows in New York: a late night in Manhattan at Mercury Lounge and an early one in my Williamsburg, Brooklyn neighborhood at Baby’s All Right. It was a toss-up between two of my favorite venues, and I went to see Boxed In at Baby’s All Right -their final night in the USA- and their show could not have been any better!

Clearly, Baby’s intimate and beautiful setting adds to the overall allure of a performance. The venue’s beautiful back lights in all different colors, and their color changing possibilities make an artist literally shine. But… if an artist can’t deliver, the prettiest set-up doesn’t help. Luckily, for all who came out last Thursday, Boxed In know how to put on a lively show: Oli Bayston on keyboard and vocals, supported by bass, drums, guitar/synths were just great fun to watch live.

Boxed In kept it with the more “dancey” songs of the album, which made for an inspiring, energetic performance. Mystery, Run Quicker and All Your Love Is gone, to name three of my favorite tracks sounded absolutely fantastic live. When they ended their set with False Alarm, I knew I want to see Boxed In again, the next time they play in New York which hopefully isn’t too far away.

Follow Boxed In on Facebook and/or Twitter and check out their expansive SoundCloud which also features a cool re-mix of False Alarm by Ghost Culture (whose self-titled album was my album pick of the week earlier this year.)

To get an idea from the show that Boxed In put on stage and the energy that radiates off, watch False Alarm:

Then mellow down a bit again with the beautiful tune of Mystery – makes you want to be right THERE: