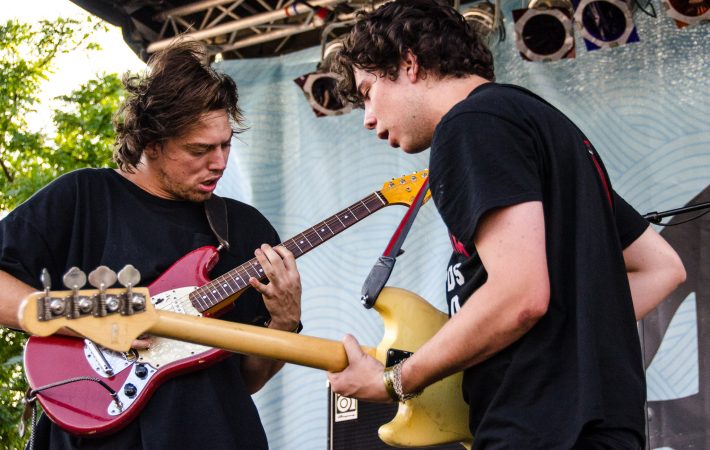 Twin Peaks, the five piece band from Chicago or “Twin Peaks Dudes” as they call themselves on all social media (incl. their web site’s URL) to differentiate themselves from the TV show that was already around when most of the band members were still far away from playing an instrument, let alone making music, played one hell of a show during last Saturday’s 4Knots Festival.

Certainly, I came across Twin Peaks (the band) before but never bothered to listen to any of their music. Big mistake! As I am writing this, I am listening to their second studio album, the 2014 released Wild Onion, liking it a great deal. Twin Peaks comprised of Cadien Lake James (vocals, guitar), Clay Frankel (guitar, vocals), Jack Dolan (bass guitar, vocals), Colin Croom – keyboard, vocals and Connor Brodner (drums) were BIG fun live! A bit goofy at times with their “funny faces” and stage banter, but that’s no doubt part of their style, alure and let’s face it… charm!

The award for the maybe funniest statement of the day also goes to Twin Peaks, their bassist respectively:

When Twin Peaks finished their superbly played set, they left behind a happy and cheerful audience, nicely warmed up for more bands to come.

…and then go and see them live: