TORRES gave a mesmerizing performance at the legendary Mercury Lounge 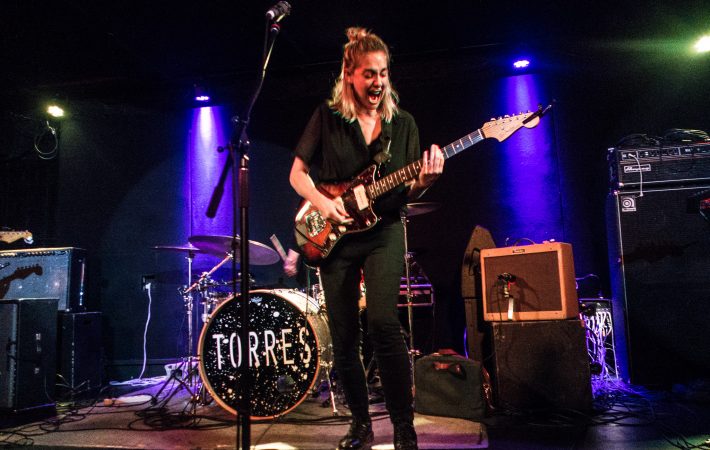 TORRES gave a mesmerizing performance at the legendary Mercury Lounge

From the moment TORRES takes the stage to the unavoidable ending when she has to leave it again, Mackenzie Scott (who goes by TORRES) holds a tight grip on her fascinated audience.

Having seen TORRES twice already before (for SXSW2015 and at Baby’s All Right), I knew about her touring band members and the order her songs would be played. That being said, I was more than impressed aka blown away by how good this 24 year old musician is – each time! She performs her very personal songs (she loves to change POV’s though) with an intensity yet at the same time an ease that seeks comparison.

Here’s a musician who not only enjoys writing songs but also performing them in front of an ever growing audience. Not that night though! Those who came out to see TORRES at the intimate Mercury Lounge, knew that they’d got treated to something special that won’t happen (so soon? ever?) again! After this tour, TORRES is playing a few more gigs in the USA (Terminal 5 for starters, opening for Courtney Barnett and  Speedy Ortiz), only to embark on a large tour supporting Garbage on their “20th Anniversary Tour” and playing big and really BIG venues all over Europe and the USA. Granted, she comes back to Brooklyn, only to play yet another biggie, the 3,000 people venue Kings Theatre.

Writing this, I still get the chills thinking of how TORRES did start her show on Friday, letting everybody indulge in a really long intro to Son, You Are No Island, while burning an inscent, to wave away any bed spirits and set the mood.

Like on her two albums, her live show balances between the quieter, more introspect and the heavier rock numbers: New Skin comes after the softer opener and is being followed by Sprinter and then A Proper Polish Welcome. Fortunately, TORRES is not one of those artists who have a beef with fans snapping photos, asking at any moment icily for “paying attention please and putting the stuff away”. In contrary! She’s not only okay with the attention she gets, but she even encourages it at times and puts on an extra charming smile or a special rocker guitar “pose”.

TORRES stunning show is as much “singer/songwriter”, as it is “rock”, as it is simply wholeheartedly entertaining. Experiencing her songs being played live is -in a way- even better than recorded, it’s simply exceptionally good. And the audience knows and appreciates this too, not letting TORRES disappear at 1:20 AM in the morning and making her return for an encore. Before she plays Moon & Back from her first album, and contrary to her usual sparse stage banter, TORRES provides a bit of context to the song: it’s written from the perspective of her birth mother who kept a journal during her pregnancy.

That was it then though, and we started to leave the legendary venue, or not… lingering around, to catch another one of Mackenzie Scott’s amazing smiles and indulge in a little chat. And yet, even the most amazing music evening comes to an end.

Son, You Are No Island, performed at Mercury Lounge, June 26th 2015 by TORRES and band.