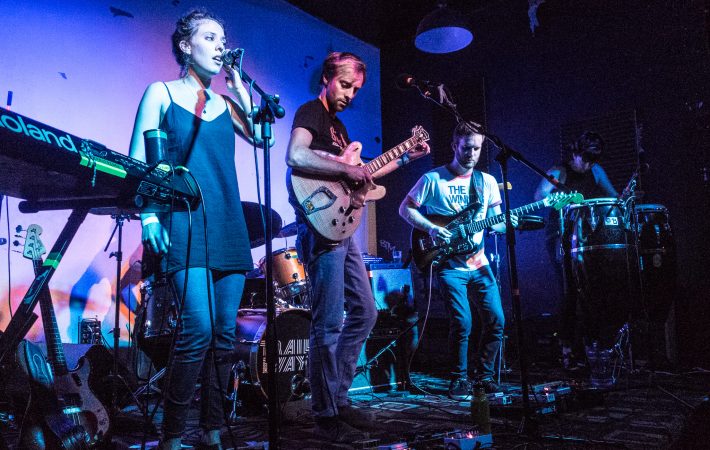 Two months ago, I came across the album Waterstrider, the self-titled debut album of the Californian band Waterstrider and wrote a review about it. I loved the album back then, and I still do and so it was a no-brainer to go see Waterstrider live when in town. Touring with Trails And Wails, they played two shows: one in Manhattan at Mercury Lounge and one in Brooklyn at the not as legendary or posh yet equally intimate Palisades BK.

In the spur of the moment, I decided on the Palisades concert and was part of a fantastic live show. I should have went to the Mercury Lounge show though (or both!) since the set there was longer, as Nate Salman (vocals, guitar) later told me later. The five musicians, and for this tour even six, snuggly fit on the tiny stage at Palisades and had to -for whatever reason- keep their set short, which kept me waiting for my favorite song –Calliope– in vein, in contrary to those in attendance of the Mercury Lounge show, because they were treated to it.

So let’s focus for a moment on the recent past aka last Saturday’s event and what was NOT missing in a show filled with energy and joie de vivre! There were lots of smiles being exchanged between band members as well as with the audience, instruments played with precision and joy, bringing the often ethereal, mesmerizing songs to life. Nate Salman’s falsetto vocals and timing are impeccable and I was in addition especially fond of the harmony between Brijean Murphy playing the congas and Walker Johnson on the drums.

Palisades saw three bands that night: Users (from Brooklyn), before Waterstrider and fellow Californians Trails And Wails there after. While we saw half the set of Users, we missed Trails And Wails entirely, with this being New York and other cool events awaiting. There was time though for a little -lovely- chat with Nate afterwards who confirmed that the album would also become available on vinyl (Yeah. Can’t. Wait!) and the possibility of signing with a cool label soon (whoever the label is, kudos to them for recognizing great talent).

Connect with Waterstrider on Facebook and/or Twitter, have a look at some photos and a video of White Light from the show and visit Waterstrider’s bandcamp page for more gorgeous music.