PHOTOS: Highly Suspect // The Catfish and the Bottlemen live at Webster Hall 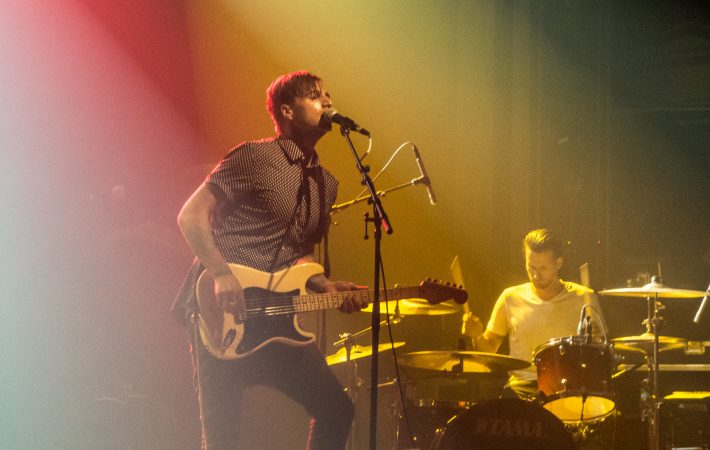 PHOTOS: Highly Suspect // The Catfish and the Bottlemen live at Webster Hall

Highly Suspect are doing a fine job in making their upcoming album Mister Asylum one of the highly anticipated debut records of this summer. Johnny Stevens (vocals, guitar) and the twins Ryan Meyer (drums, vocals) and Rich Meyer (bass, vocals) have not only been on tour with one of UK’s most sought after young bands, Catfish and the Bottlemen, but they also made time to play the “Club Stage” at Bonnaroo and filling up their tour schedule with dates that well reach into 2016 already.

Yesterday though, Highly Suspect played at home. Sort of, since the three are originally from Cape Cod, yet call Brooklyn currently their home and with Webster Hall being a Manhattan music venue… a beautiful, big theater at that and sold out. No surprise here since Catfish and the Bottlemen are already selling tickets for their October stint at Terminal 5! Now it’s maybe also the time to mention that we won’t say much about their show other than that the audience went absolutely nuts as soon as the four from Llandudno, Wales took the stage not even 15 minutes after Highly Suspect have left it. There was a sea of dedicated fans, knowing the lyrics to all the Catfish and the Bottlemen songs and happily chanting along. It was actually quite uplifting to watch this spectacle for a while…

Yet Highly Suspect also had fine share of fans in attendance and quite easily should have gained new ones too. It’s no doubt easier to move an audience with a cherished album out in contrary to – by now- only four officially released songs, yet this will change when Mister Asylum will be out mid July. Three songs into their set, Highly Suspect played an old(er) crowd pleaser with Bath Salts (there’s also a video for this song). Shortly there after, Johnny Stevens exchanged for a few songs his battered Fender for a Gretsch White Falcon (according to their Instagram feed, a gift from their record label 300) to perform the song with probably the most “hit” potential, the stunning and super catchy Lydia, in which Highly Suspect’s frontman can show all the facets of his voice – vocals that tend to get the comparison to Caleb Followill (Kings of Leon) a lot.

The show that Highly Suspect put on was wild and passionate, in true rock’n’roll spirit, and July 17th 2015 marks the date for Mister Asylum finally being out for everyone!

== All concert photos by glamglare.com – Elke Nominikat and Oliver Bouchard =