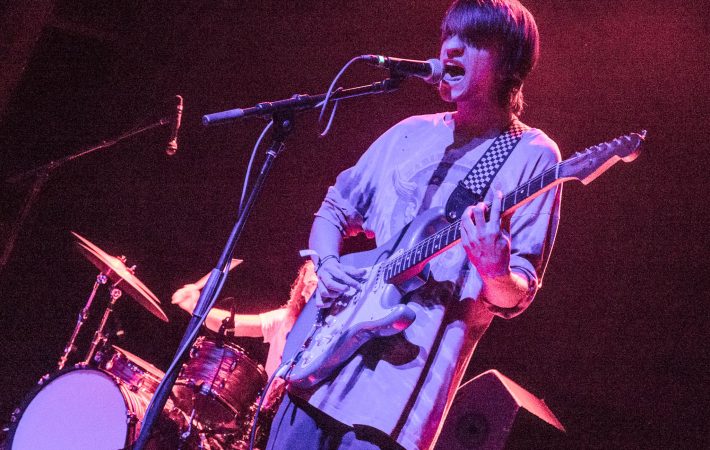 While Saturday possibly stood out as the “main” day of Northside Music Festival with more great shows simultaneously happening than one could possibly ever think of going let alone doing so, Sunday -the last day of the festival- offered again plenty of amazing events!

Still a bit sleepy and fully satisfied by Saturday’s shows, we headed down to Rough Trade NYC to see the only 22 years young Jackson Scott  from Ashevillle, NC perform his songs from not just one but already two albums. 2:00 PM on a sunny afternoon was a bit of a stretch but I am so happy that we made it right in time because we got treated to an exquisite show. While I really dig his album Sunshine Redux, Jackson Scott together with his touring band mates Chace Gorter (bass) and  Aaron Kostial (drums) were definitely waking me up and blew me away! So much so that I decided to also make it to the early evening show at Cameo…

From Rough Trade NYC, we headed over to what become sort of our main hang-out during the festival: Black Bear Bar. Brooklyn’s Monograms were on stage and in full swing and I liked what we heard. I will definitely follow this band more closely

Next up were Hard Nips, an all Japanese girl band from Brooklyn, with a familiar face on drums: Hitomi (Statues of Liberty). Boy! These women knew how to rock and to heat up the pretty chilled down Black Bear Bar. They played un-pretentious rock with punk elements, great songs with catchy hooks. It was great fun to watch the four on stage and I am sure this won’t be the last time.

Aside from Jackson Scott, another highlight of this day were Light Asylum, scheduled to play the outdoor stage on Bedford, the “UO Stage” (UO for Urban Outfitters). I’ve seen Light Asylum once before and knew we were in for a treat: Shannon Funchess vocals are pretty unique and her style hypnotic. (Most likely also one of the reasons why she’s been on tour with The Knife – amazing!). Same goes for her touring keyboardist Raphael Radna, who mesmerizes with his his style of playing keys.

They truly stopped (foot) traffic on Bedford Avenue and had the audience dancing. We also learned that there is a new album in the making and there won’t be any other show any time soon aside from some West Coast gigs.

Where to go from here? Cameo – which recently dropped the “gallery” from their name… Jackson Scott was opening the night there and put on the same killer show than four and half hours earlier at Rough Trade NYC, only on a  significantly smaller stage  and venue, with just minimal stage illumination. Experiencing Jackson Scott’s stand out songs Ripe For Love and Dissonance live would be totally worth to go to a third show of his, only if there was any. When he’s back in New York, I’ll be there to hear more of Jackson Scott’s “new psychedelic grunge”, as I’d call it.

Bummer! We came too late to see a friend’s band because our quick dinner took too long and their set also might have ended too soon. We only heard the last couple of notes and the band clearing the stage. While we were already at Rough Trade, we hung around to listen into the next band which was Shilpa Ray. While her music doesn’t exactly fall into what I really love, I was impressed with her vision and artistry, and her very own version of rock’n’roll… with an old school harmonica.

And while we intended to wrap up the festival with a show at Union Pool, life came in between in form of running into a group of friends at Union Pool’s atmospheric outdoor space and since these friends also happened to be musicians, the festival found an end in style. ’til next year!