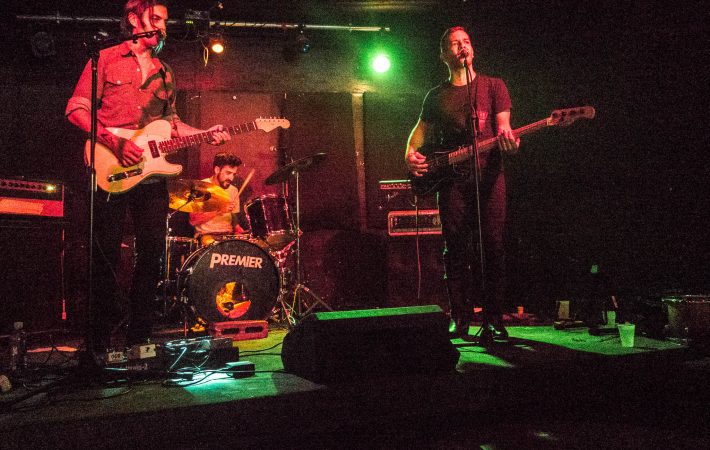 One of the bands playing Northside Festival I was most eager to see were Courtesy Tier from Brooklyn, a three piece initially formed by Omer Leibovitz (guitar, vocals) and Layton Weedeman (drums), and now completed by Alex Picca (bass). They played Bar Matchless at 4:20 PM and put on a hell of a show! They know what to do with their instruments and how to create great blues-driven, modern rock. I was especially blown away by Omar Leibvotiz’ guitar chops, great joy to listen and to watch. Courtesy Tier ended their set on a high note when they asked whether there’s room for one more song, and that they would play a new one that they’ve just recently rehearsed and never played live before, and that it wouldn’t matter anyway, since the audience was already there. And like all the old(er) material, this new song was one fine piece of playful, catchy blues-rock.

We started the night – like many Friday nights – at Union Pool for the Audiofemme showcase. Upon entering the venue, we were immediately drawn into the really cool sound that got produced by only two musicians on stage: a drummer and a singer/guitarist. We loved instantly what we got exposed to, even though we only caught a handful of the well crafted songs somewhere between rock and electronic: you will hear more about Of Clocks And Clouds, consisting of Joe Salgo (guitar, vocals) and Ross Procaccio (drums, vocals) on glamglare soon!

The next band, Leverage Models also makes a lot of noise but they crammed six people onto the small stage at Union Pool, including two sets of drums and percussions and one backup singer.

We also saw a glimpse of ONWE a four-piece from Brooklyn with a British vibe, who we liked a lot. We stayed for a few songs, before heading back to the Black Bear, where we missed the band we wanted to see. Instead Sir Jarlsberg was doing rennaissance hip hop with a horse on stage. Somebody’s gotta do it!

The night ended at The Living Room. We caught a glimpse of Stranger Cat who is a Jekyll & Hyde kind of performer: when we entered she was a piano singer/songwriter, before she went over to a Ableton setup on the other side of the stage to do a Grimes-style dance pop song.

After a break at The Living Room’s beautiful rooftop bar, we ended the night with the excellent Salt Cathedral. We knew them from last year’s CMJ and can’t wait for their debut album, maybe out by end of the year.