TORRES mesmerizes at Baby’s All Right 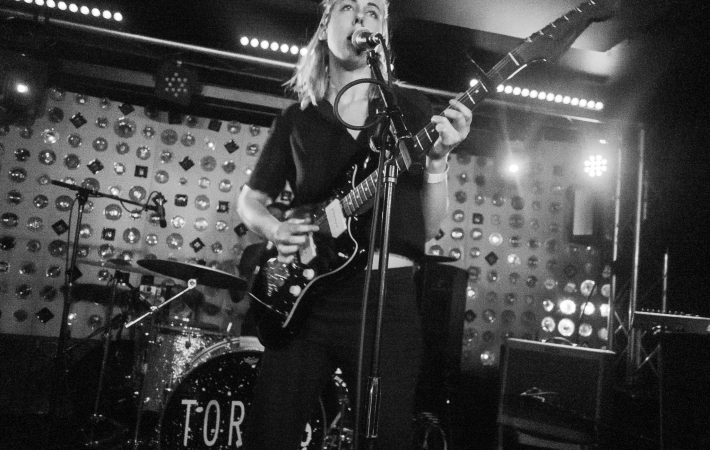 TORRES mesmerizes at Baby’s All Right

Living in New York City, going to a live show once if not twice a week, I am rarely star struck. While I am always looking forward to the concert I am going to attend and the musicians I’ll be seeing live, I do not anticipate a show as much as I anticipated yesterday’s -sold out- show by Mackenzie Scott, who goes by the stage name TORRES at Brooklyn’s Baby’s All Right.

Around five in the afternoon, I couldn’t focus on anything anymore, not even listening to Torres amazing second album Sprinter, released earlier this month. Guessing that she might be on around 10:00 PM (correct!), I made sure though to be there ahead of time, to have a lazy drink at the bar and fully enjoy the opening band Aero Flynn, lead by Josh Scott (no relations between the two acts). Aero Flynn’s music is more electronic and synthesizer driven than TORRES’ and I could not have wished for a more likable line-up! (More on Aero Flynn at a later point.)

The change between the two acts was done swiftly! The Baby’s All Right crew carried the extra drum set and all extra synthesizers from stage, TORRES and her band of three took positions on stage, checked their instruments, tuned, made sure all is in order, only to appear a couple of minutes later again to start the show, shortly after 10:00 PM.

Not so fast… what was the lighter doing there next to Mackenzie’s setlist? Upon positioning herself  in the middle of the stage, she took the lighter to burn an inscent flute  and waved it a few times to put it down again together with the lighter, next to her setlist. Then they started the show with Son, You’re Not An Island… – what a great opener! The POV of this song is no other but God himself.

After this grand opening, Mackenzie Scott reminded us that she’s only 23, or 24 by now to be precise, with New Skin, only to head right into the maybe catchiest song of her second album and its name sake Sprinter, choosing the sun, and run it back. In between, she took sips from a water bottle and focused on tuning her guitar. Whether the guitar really needed tuning or it was more to re-focus, that’s something only she will know the ultimate answer to.

Like on the album, the more playful Cowboy Guilt followed A Proper Polish Welcome, after which Mackenzie introduced her touring band. As a high point throughout her mesmerizing and pretty intense show, TORRES delivered the song probably the majority of the audience was waiting for: Strange Hellos! Heather, I am sorry that your mother… all too known by now… Mind-blowing though was the intensity with which Mackenzie Scott delivered this song. Her eyes were almost popping out of her face,  staring at the audience, screaming the chorus Strange hellos are not my bag // Better never having had – haunting! After that, she took some extra time, sipping her water, tuning her guitar… And she once again addressed the audience, thanking everyone for coming out, stating that this was her most important show of all her shows in Brooklyn throughout the last couple of years. She was smiling, relaxing, and showing off her devastatingly beautiful smile.

With Strange Hellos, probably being the highlight of her set, she settled for Honey next, from her first album, followed by The Harshest Light and closing with November Baby, again from her first album. She burnt the inscent a bit more, waved it as if to clean herself from any bad spirits and left the stage, smiling but not without assuring that she’d be “out there, to chat with whoever wanted to”.

So, back to the starstruck moment: after the show, Mackenzie took position behind the merch table, to chat with fans. After a show like this, it was almost surreal, that I could simply walk up to her and say ‘hello’. When it was my turn, I hardly knew what to say and stumbled something about having seen her in Austin at the church… and how amazing tonight was… and how much I love her album… What do you really tell an artist? And what do they really like to hear? When it comes to artists I really like, I have not the faintest idea. And so I bubbled a bit, yet TORRES was gracious and she hugged me not only once but twice during the course of our chat. I do wish her all the very best… and that’s also what I might have told her!