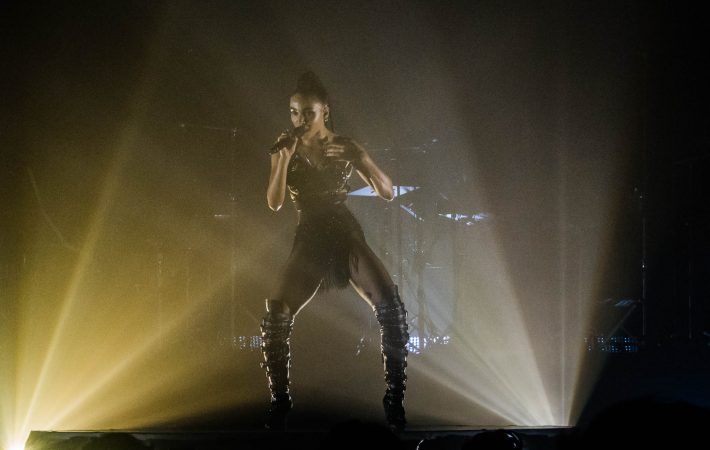 Sunday night we ventured to Sunset Park to see a special performance by FKA twigs as part of the Red Bull Music Academy series. The place, Brooklyn Hangar is a large warehouse, normally used as a sound stage, outfitted for a three night, sold out series, where Red Bull gave twigs free hand to realize her artistic vision.

The “presents Congregata” suggests something different from a normal show of hers, but musically, it was fortunately not. As she said in her debriefing near the end of the event, she wanted to show how she felt when she wrote her songs. For that she slightly expanded her touring band and employed one female violinist and 12 male dancers, all her good friends, she assured.

It is consistent with her work that she chose to counterbalance herself with a overdose of masculinity. She has done this before – the video for Papi Pacify comes to mind, which she enacted on stage in less painful, but no less provoking way. The show worked well in the choreographed pieces, like the beautiful rendition of Two Weeks with a flying scarf or, my personal favorite scene, when she and her crew danced under bars of red laser, which resulted in stunning effects. It worked less for me when she left the guys alone to show off their tricks: her deeply sensual music feels somewhat at odds with the showy performance of her dance crew. On the other hand, it fitted to the theme of Congregata, a gathering of some of the people who play a role in her art.

There was one remarkable moment, when twigs joined her band for a song and played some MIDI controller herself: a reminder that she sees herself as a musician first and not just a performer. I hope she stays that course in the future: a show like Congregata rather provides distraction from her music.

FKA twigs, who generally likes stage banter, stayed mum until near the of the show. Then she bathed in the thundering applause for a minute or two, radiating genuine happiness. After that she explained the background of the show and why she relates to New York so much: her first performance was at Santos Party House and she considers her show at Webster pivotal for her career. New Yorkers like to hear that and we will welcome her back to her next show, hopefully soon.