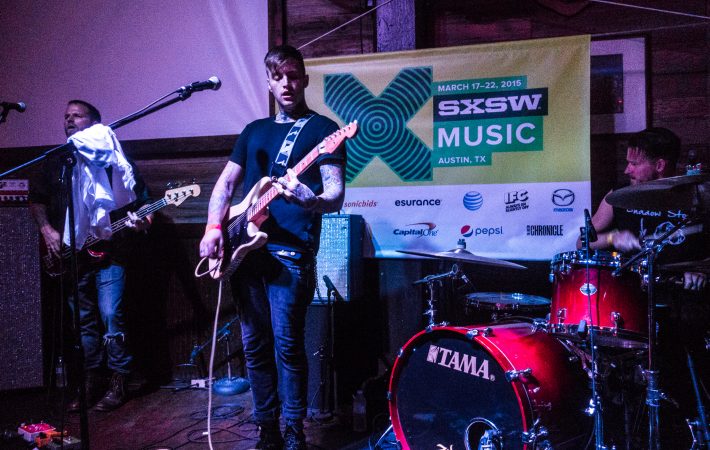 Keeping a favorite for last… while our South By Southwest coverage ended about two weeks ago, there’s still a band left, I wrote about before but wanted to cover as well: Highly Suspect – a pretty awesome three piece from Cape Cod and if not touring, currently residing in Brooklyn but touring they do!

Not only are Highly Suspect booked for Bonnaroo but they’ll spend the whole month of June touring with one of UK’s hottest young bands Catfish and the Bottlemen, getting audiences warmed up, and those in attendance should be up for a treat.

With Highly Suspect’s popularity growing, I am especially glad having seen them in Austin not just once but twice: at one of SXSW’s more intimate yet very Texan venues, The Trophy Bar, and a very unique “summer at the pool” event aka Sonic Tonic Festival. On both occasions, Ryan Meyer (drums, vocals), Rich Meyer (bass, vocals, peacekeeper [sic!]) and Johnny Stevens (vocals, guitar, synth) performed loud, with great skill and precision.

I’m hardly the first to notice Johnny Steven’s stand-out vocals, which certainly give Highly Suspect their unique edge. Aside from these killer vocals though, the lyrics are worth listening to more closely too, and the overall sound is powerful, high energetic rock with punk, blues and prog rock influences. Best you listen to it for yourself, and get the album Mister Asylum when it drops on July 17th.

For now, enjoy three songs from the upcoming album. Start with the crazy good Lydia and then the newest tracks Lost and 23 Feat. Sasha Dobson.