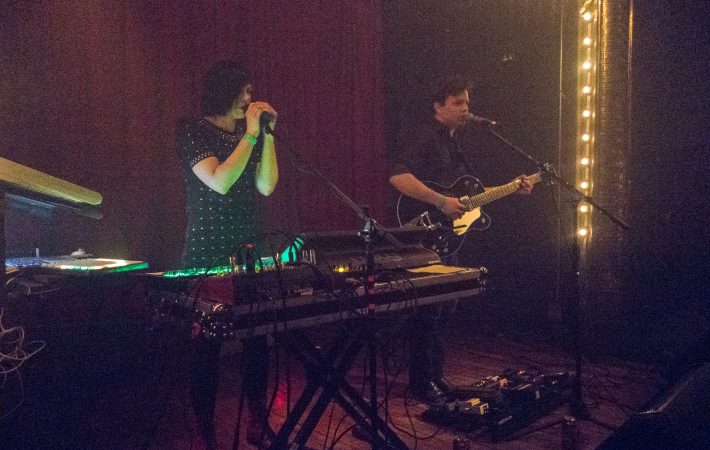 What a night! It was the first hot day of the year and it was Cinco de Mayo, so droves of people flocked to the Union Pool courtyard with its resident taco truck. But a good part of the crowd left the summer night party and made their way into the venue to see Weeknight together with openers Aircrafting and Courtship Ritual.

We arrived early, so we saw the whole lineup. The four-piece Aircrafting came at some point so close to Pink Floyd that I was wondering if they played a cover song. But I don’t think it was one: they play their own brand of guitar-heavy, psych-infused rock, which I found delightful, in particular since both guitarists shared the solo duties evenly which took away much of the self-indulgence that extended guitar solos are prone of. Courtship Ritual was a lot closer to what we would see later with Weeknight: Jared Olmstead plays bass and kicks of the drums on the computer and Monica Salazar sings in front of a projection.

Weeknight came on after 11:00 PM. The duo is comprised of Holly MacGibbon and Andy Simmons, both residing in Brooklyn. She plays keyboards and occasionally hits the drum pads, while he plays guitar and both sing in unison, which gives the vocals an eerie, chant-like character, while the music falls somewhere between 80s darkwave electronics and shoegaze. For sure it is on the darker side and very dark was even the stage until Andy asked for some red light and smoke: “We’re feeling sexy tonight!” Good news for the photographers – you see the difference in the photos.

Weeknight is currently working on their second album and they played a few of their new songs, like In the Dust and California (both available on Bandcamp and Spotify). The new songs feel fuller and more massive than the material on their debut Post Everything, so I believe we’re in for a treat.