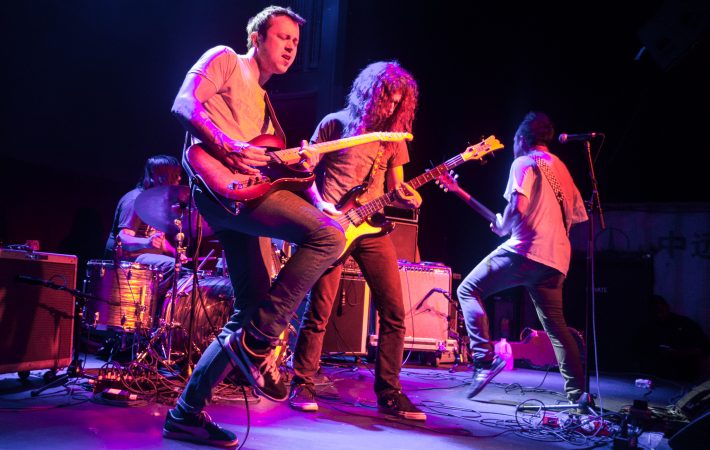 What. A. Show. What a SHOW! Going through my photos, listening to Lee Bains III & The Glory Fires 2014 album Dereconstructed, I could beautifully re-live the experience!

The show was loud. Earplugs loud. But that’s fine with me because I am usually prepared. I was not prepared though for the special treat and am still happy that I made it down to Rough Trade in the morning, shortly before noon, to hear AND see Lee Bains III & The Glory Fires setting the bar (high!) for Record Store Day at Brooklyn’s newest vinyl and music venue paradise aka Rough Trade NYC.

I had listened to the Dereconstructed a few times, and liked the album, but having seen Lee Bains III (vocals, guitar),  Eric Wallace (guitar), Adam Williamson (bass) and Blake Williamson (drums, backup vocals) live, made me appreciate the music even more, and let’s be honest, love it! While I am writing this, I’ve also spent quite some time reading the lyrics and besides great music (as per their own account “The real Alabama rock-and-roll”), the lyrics on Dereconstructed  are pretty amazing too.

The four on stage were bursting with energy, playing their instruments loud and with precision, never standing still. At one point, even Rough Trade’s considerably large stage was no longer big enough for Lee and so he left it, played and sang among the audience for a little while, just to leap back on stage in one, incredible move. – The photos that I took don’t do this stint justice  but you might get the idea.

When chatting with Lee afterwards (who’s speaking voice is as deep and husky as his impressive vocals) I learned that the band has been touring relentlessly (that’s how I’d call it) and was playing a show that very same evening at Brooklyn’s Knitting Factory. Sadly, I couldn’t make it to that show due to other evening plans. One thing’s for sure though, the next time Lee Bains III & The Glory Fires are back in town, I won’t have anything better to do but to make sure to attend their show!

The Company Man is just such a great, energetic song, and Dereconstructed‘s opening track, and the right song to lure you into the whole album:

KEXP sessions are always a special treat and this one is no different, well, it is because I don’t know how the band could be contained in this small space and watching the session, you can see that it is becoming harder and harder for Lee & Co. to remain on the tiny stage provided…