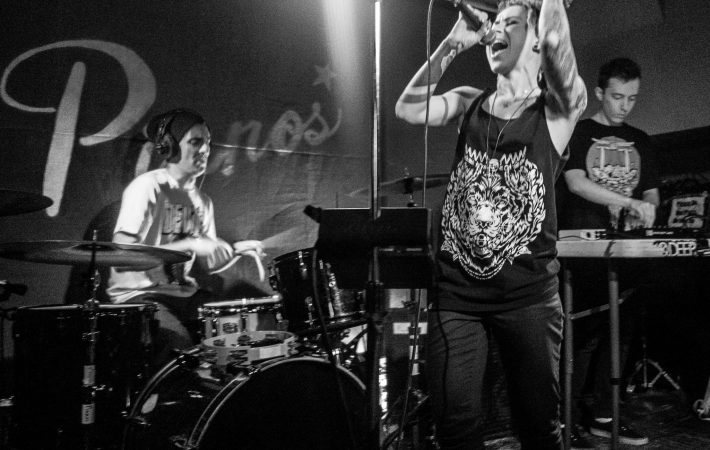 Spring has finally arrived in New York City, hand-in-hand with hundreds of people strolling down the busy streets of the Lower East Side, where doors and floor-to-ceiling-windows are being opened wide to welcome the long awaited warmer season. Everywhere something cool seems to be happening and those who were wandering around wanted to be part of it. Those who made it to Pianos that Friday night, definitely were part of something cool: a showcase curated by Light-Minutes Away featuring Carbon Mirage, OLYA, Swampa_ZZ, The VeeVees and Satorii, headlining the event.

With the L-train not running on weekends and after 11:30 PM for the next five weeks, I wanted to take a little of the pleasant evening in outdoors, and unfortunately missed out on Carbon Mirage and OLYA but was there right in time when Swampa_ZZ got the party going. When three members of The VeeVees took the stage (all male), I didn’t know yet what was coming but when their missing female member arrived, the room took an extra sizzle. When was the last time you saw a singer, performing three songs, all dressed in a black, lacy jump suit and then pausing just to change her sexy costume? On stage? Into something equally hot and sexy? So you get the picture. Aside from the stunning visuals, the music was professionally executed and highly enjoyable as well.

Anticipation was building up, and while some audience members left, new ones were piling in and around 11:30 PM the party continued with Satorii making the stage their own. Having seen Satorii before, I was looking forward to not only seeing them again but to hear their evolved sound, since I learned that they were adding a guitar to their mainly electronic mix. Satorii describe their music simply as “electronic fusion”, where they skillfully take from genres like reggae, rap elements, dubstep or drum and bass to name those that come immediately to mind. Satorii started their set with Addiction, a number that starts out chill and increases in urgency and complexity, making The VeeVees impressive visuals quickly forgotten thanks also to Jerrra Blues’ charismatic vocals and stage presence. Throughout the show, Jerrra introduced the band, starting with Jim Saint-Amour (drums) right after the really cool, newer song Tribal. Next track up was Mirror, a very likable, catchy song, which I hope Satorii will record soon! Jerrra continued to introduce the band, one member at a time. She picked the new kid on the block next, and welcomed Vincent Denis on guitar. Then we got treated to a slower, keyboard heavy number with Billie, followed by Frozen, Madonna’s mega hit Satorii style. (It’s an excellent cover version!). Eventually, Jerrra completed her introductions by announcing “and this is Alex Mal, on his digital platform”, causing some heartfelt laughter on stage and among the giddy audience, with “digital platform” referring to Alex’ synths gear of cause

Shadow, the last song of the evening, was yet another great tune that lets Jerrra’s voice shine and brings out all the different facets of it. I am also the first one to admit that I liked the guitar addition. The guitar complements Jerrra’s voice nicely, takes on some melody, supports at times… personally, I truly like this change in Satorri’s style and am curious where they go from here. Sadly though, even the most enjoyable evening had to end, yet we left Pianos with a joy filled heart, after having been treated to great music and performances all around. ‘Til next time!

To get an idea of Satorii’s “electro fusion” listen to their EP, recorded as a three piece though, without guitar.