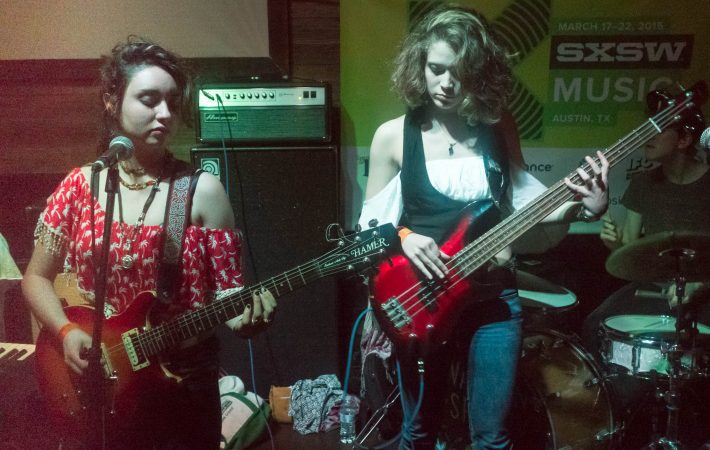 The Snaz is a young four-piece band from Vermont: They are remarkable, because Dharma, Mavis, Zach and Nina are neither siblings nor carefully selected by some cunning producer. They are just (?) four teenagers who have been working together creatively for about three years and that to great results.

Their music is generally upbeat, but still has enough gravity to keep somebody like me, who is drawn more to the darker side of music, interested. It is guitar-based rock, with a lot of melody from the piano. The songs are anchored in guitarist Dharma Ramirez’ fantastic vocals, which are somewhere between Chrissy Hynde and Ibeyi’s Lisa-Kaindé Díaz. Mavis Eaton plays the keys and throws in some sort of rap on Try and Try and Try, one of the many surprise elements in their music. On bass Nina Singleton-Spencer does impeccable work and Zach James, at only 14, may have a great career on drums before him.

When we first listened to a song of theirs during our SXSW 2015 preparation, we liked it so much that we spontaneously supported their Kickstarter to help raise the funds that brought them to Austin. There, for some reason, their official showcase was booked right at the center of Saturday night 6th Street hell: they played the back room of Trophy Bar, which could only be reached by elbowing yourself past a mechanical bull through a dense crowd of partying spring breakers. Surely that was not the best place for their fresh sounding music, but they held themselves well and even gave an encore, a rarity at SXSW.

Their self-released debut album Running Away From Home is out now (iTunes, Spotify). It looks like an apt title for a bunch of teens forming a band, but they didn’t have to run away to make it to SXSW: their trip was well supported by their families and by a local radio station.