Mansionair live at the West Tent for the Aussie BBQ, SXSW 2015 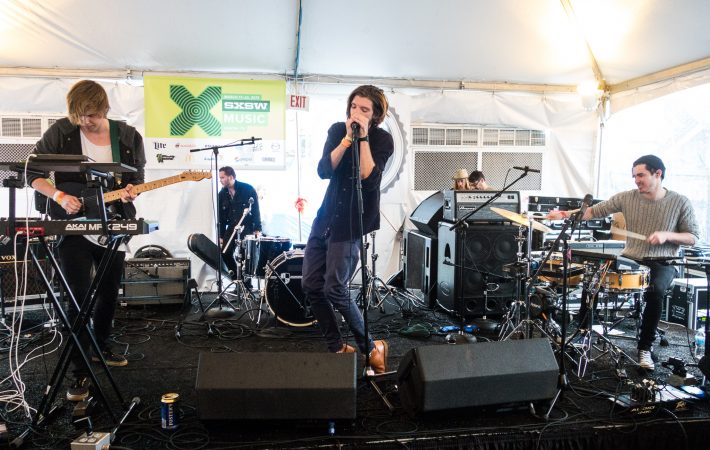 Mansionair live at the West Tent for the Aussie BBQ, SXSW 2015

Since early January, I am pretty much obsessed with the music of two “three piece” bands: while the one band currently resides in the same city as me, the other one lives far away, in Sydney, Australia to be precise. Both bands are currently releasing their debut albums, and the material that they’ve released so far couldn’t be more convincing and simply awesome. The band I pick first, since I’ve only seen one show of theirs, is Mansionair (see my post from 01/16/15) comprised of Lachlan (synths, bass), Alex (drums) and Jack (vocals).

One might be tempted to ask, this being a three-piece, why isn’t the singer playing an instrument too? Hold your breath! There’s simply no need for yet another instrument (at least not for the songs they’ve performed that day) and it is pure joy to experience them on stage, and seeing Jack singing and moving to the sound. I wish I could have seen Mansionair more often than at the Aussie BBQ only, or that I could have made it to their Mercury Lounge or Baby’s Alright shows in New York post-SXSW. There’s always another chance, right?

Nevertheless there was time at the Aussie BBQ for a brief chat with Alex, who could not have been more charming and nice. Follow Mansionair on Facebook, Twitter and/or Instagram, and see them live!

I am not exactly a fan of covers, especially not of songs I really love, yet this might very well be the exception to my own personal rule. What Mansionair do with Future Island’s Seasons (Waiting On You) is phenomenal: they take it slow, let Jack’s alluring vocal skills shine and basically “mansionair” the song, aka making it their own.

And here the hauntingly beautiful, sexy and simply fantastic Hold Me Down – one of the two original songs of Mansionair currently available. Performing it live in the studio of Like A Version: