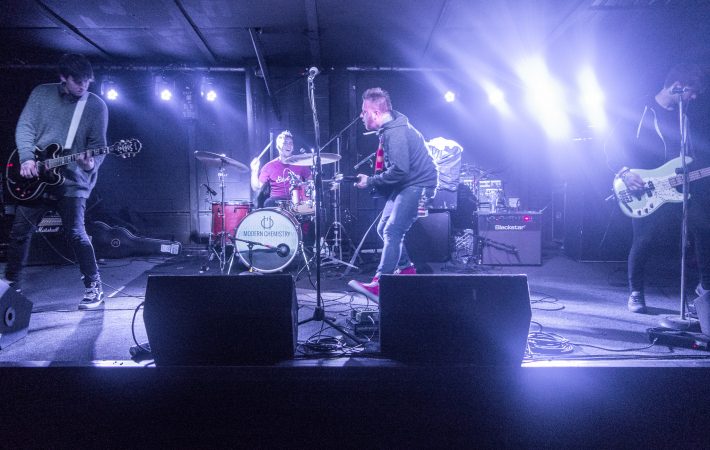 The rain has finally stopped and while it was certainly much warmer that early Spring evening in Austin than it would have been in New York or say New Jersey, it was still kinda cold, yet Modern Chemistry put enough heat into their show to fire up their audience at Red 7’s patio!

I’ve been following Joe Zorzi (vocals, guitar), Brendan Hourican (guitar, vocals), Matt Coccaro (bass, backing vocals) and Jesse Slachman (drums, percussion, backing vocals) since September 2014 (“new music” post) but haven’t had the chance yet to see them live and put them as a “maybe” on my SXSW2015 list. They were on early, and my partner in crime had a “must see” later that night, that’s why I insisted on seeing Modern Chemistry – glad we did!

Modern Chemistry’s performance was exhilarating and so much fun. Material from the two EPs Self Help Guide for Being Alone and We’ll Grow Our Of This sounds live as good as recorded and I am digging Joe’s powerful, husky vocals even more now, having seen and heard him and his band mates live! Not surprisingly, Joe’s speaking voice is charming too, as I had the pleasure to experience in a quick and lovely post-show chat.

Follow Modern Chemistry on Facebook and listen to their EPs on bandcamp and try to catch them live!