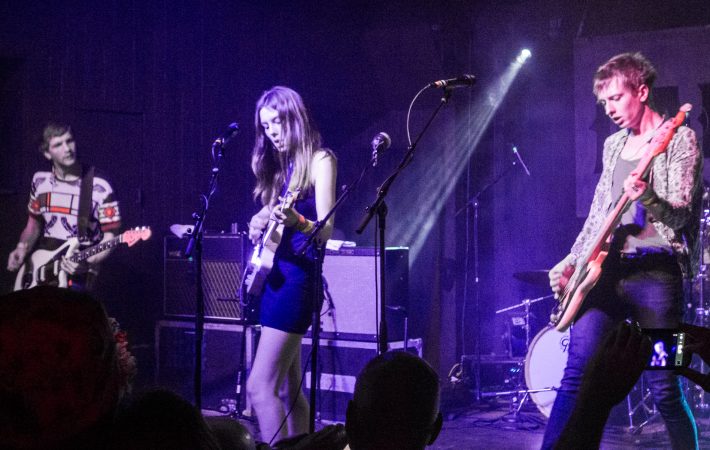 Without ever having listened to any of Wolf Alice‘s songs but somehow knowing that this might be a cool UK band to see, we headed over to The Parish where there was luckily no waiting in line for us and where we could instantly find ourselves in the middle of an exhilarating show!

Wolf Alice were barely their first song in, yet the crowd in the pretty packed room was already raving and with reason: Ellie Rowsell (vocals, guitar) Joff Oddie (guitar), Joel Amey (drums) and Theo Ellis (bass, backing vocals) were playing their hearts out and succeeded in captivating the ones of their audience.

I couldn’t help but feeling positively infected as well and thoroughly enjoyed the music and the performance. In deed I loved Wolf Alice’s mix of rock, grunge and pop that much that I am very much looking forward to listen to their upcoming debut album My Love Is Cool which is scheduled for June, 22nd 2015.

Wolf Alice was the only band we saw at The Parish that night since we wanted to see some other bands at Main II, The Trophy Bar and later that night at Valhalla. I’m still thrilled though that we’ve caught Wolf Alice on this fairly small stage and could also get a couple of photos taken:

Follow Wolf Alice on Facebook and/or Twitter and watch this just released video of You’re A Germ part of the Last.fm Lightship95 Series. To hear more from Wolf Alice, visit their Soundcloud Page with lots of great songs and material.

To get an idea what a Wolf Alice live show would look like, check out this cut from the Glastonbury Festival 2014: