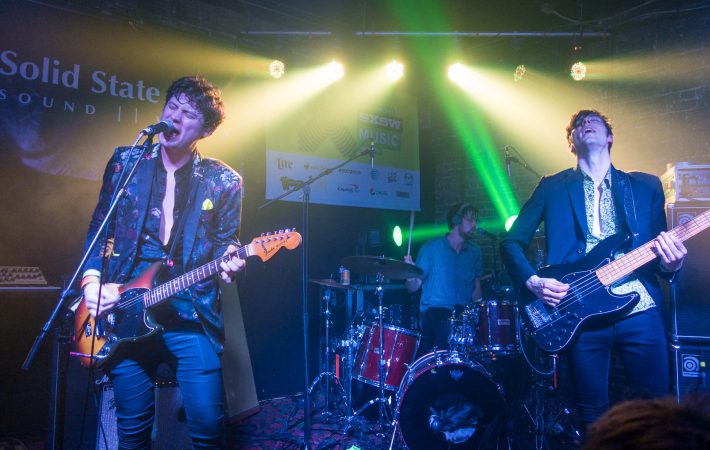 When preparing a “schedule” for SXSW, it becomes very quickly apparent that Wednesday and Thursday are the days with the most shows and parties. Every hour one could go see at least five favorite bands! Not so day one of the festival, Tuesday. Granted, my partner in crime and I had a few bands lined up for our first night in Austin but there was a big empty spot from 8:00 to 10:00 PM. Do we really want to see a Metal band as our first official showcase? And how much fun would it be to line up early at the British Embassy just to see Shura and Catfish and The Bottlemen? NONE, we quickly agreed!

And so we hang out at a quickly for SXSW revived and re-named venue called The Main II to see Idgy Dean, where we still were early and got pleasantly surprised by kinda running into the actor Adrian Grenier and then by what was taking place on stage: there was a three piece playing their hearts out and in the process quickly catching mine!

Dreamers comprised of Nick Wold (vocals, guitar), Chris Bagamery (drums, backup vocals) and Nelson (bass, backup vocals), currently calling Brooklyn their home base. As of now they’re on tour, honing the material for their upcoming first LP. I thoroughly enjoyed the life performance and thought it was the perfect intro in into a fantastic South By South West music festival, where I had the best of times. And Dreamers, like so many other bands and wonderful people I met during my time in Austin were an important part of it!

While listening through Dreamers’ soundcloud material, My Little Match maybe turned me on the  most, and so it’s my pick:

The catchy and upbeat song Wolves got a video treatment and is a strong second favorite. The video is fun, with even some surprising moments and a lot of tongue in cheek situations. I like it a lot but watch for yourself: