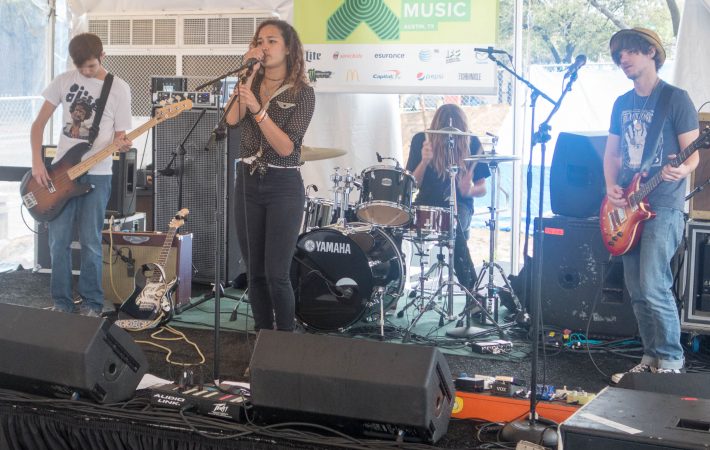 The SXSW Saturday was accompanied by conflicting feelings: we made it almost through, but then it’s also almost over. Inevitably we slowed down, but we ended up to see a lot of new music and had a fantastic day.

The West Tent had a an unlisted, unsponsored event featuring the local band Skyline doing bluesy rock with female vocals.

I would have liked to stay for more, but we needed to move on to the Audiofemme showcase to see Avers a psych-rock six piece from Richmond which we ran into at various locations. They cram up to four guitars on stage and despite the overcrowded stage they put on a show case. Following on the same stage were Born Cages a rock trio from Brooklyn who I saw before at CMJ.

Back at the convention center, Brooklyn experimental guitarist Noveller played on some side stage. Her ambient soundscapes are somewhat out of place at such a bland space like a convention hall, but she is such a beautiful performer that she still could pull it off.

After a short snack at the hotel room we went off to see Jersey quartet Modern Chemistry at the Red 7 patio after we almost got lost in the labyrinth of nested in- and outdoor stages between 6th and 7th Streets. Their singer Joe Zorzi goes wild on stage, including demolishing the drum set in the end.

From there we went to Swan Dive next door to see Lowell on the patio. She drew a lot of dedicated fans (including us) into the place and rewarded them with a crazy show. She also played a few new songs, which a liked a lot: they seem to be more driven by electronic beats than her previous work.

The Snaz at the Trophy Bar

Next stop: The Trophy Club for The Snaz and unlikely quartet of four teenagers: three girls together with a 14 year old drummer. We supported their Kickstarter that helped to bring them to Austin and it was so worth it: their fresh style of guitar-driven pop together with Dharma Ramirez beautiful lead vocals (I heard some Lisa Diaz in it) could hit it big. But for now, their were quickly ushered out of the place because at their age that was no place for them in a bar.

For us neither: I think I haven’t been to a place closer to hell in my life than 6th Street that Saturday night. Shouting, chanting, drinking everywhere. So it was fitting to wrap up the day and the festival at the church: Amason a Swedish five piece labeled as folk were on. The show reminded me why I had put them on the list: their music is melodic, beautiful and soothing and I was particularly taken by one song (I have to find out which one later).

Torres at the Presbyterian Church

They were followed by Torres, the stage name of Brooklynite Mackenzie Scott, who was traded as the must see shows of the festival. It’s hard to shake off a comparison to EMA, who we saw at the same spot last year: they are both tall, short-haired, blonde women and also musically there are some overlaps. But Torres music is on the heavier side with slow building songs that leave her sometimes screaming in the end. Then she quickly comes down from that for a friendly “Thank You” to the audience. It was an intense show from an intense performer that reminded me why I love music so much, even after having seen dozens of shows during the last few days.