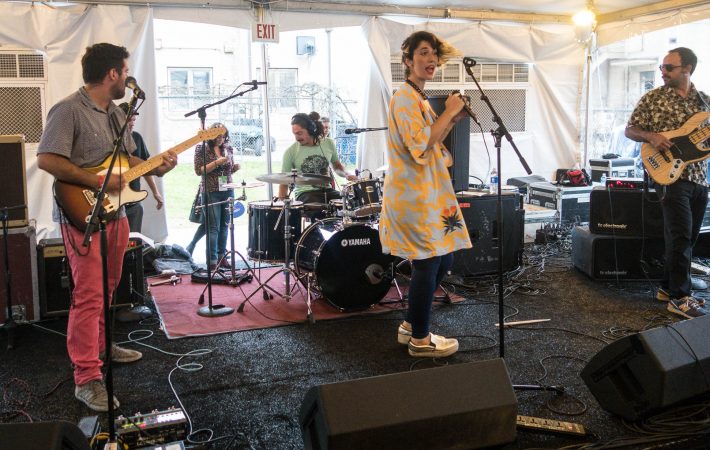 After all the preparation and listening through some 1,500 bands, we finally arrived in Austin to see some live music. But plans are subject to change at SXSW more than anywhere, so the first show we actually saw was singer-songwriter Malia Grace at a cafe in the airport. It was only for a song from the distance, but as an official showcasing artist, she counts for our first show for this year’s festival.

Same as last year, we stopped at Darwin’s on 6th Street have lunch and see a random band, but here St. Patrick’s Day eclipsed SXSW for the day so a mini-parade with drums and bagpipes had to do. For the rest of the week Darwin’s is part of the Red Gorilla Music Fest, which has a line up of 450 bands of its own.

Safari at the West Tent

Then finally, after going through the formalities and checking out the block party at the convention center, we made our first musical discoveries, at a Chilenean showcase at the West Tent: Safari an electro-pop trio and La Guacha a four piece fronted by the charismatic singer Soledad Del Rio. Both acts attend the festival under the SXAmericas label, but do a quite global brand of music.