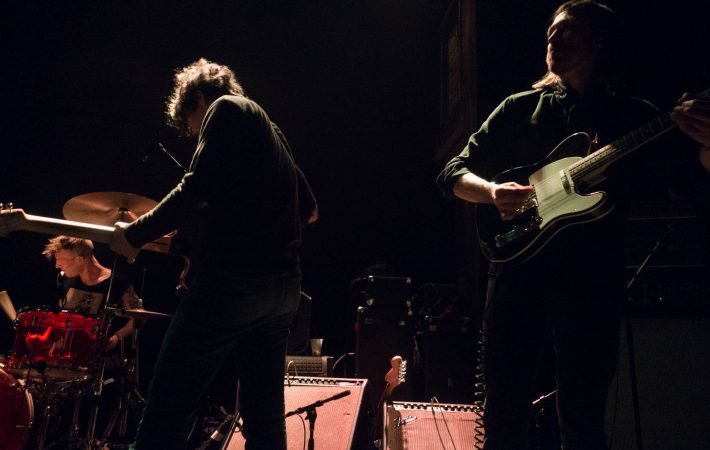 The show last Saturday at Rough Trade NYC, marked the third time that I saw Disappears live. I’ve also seen them playing the intimate Union Pool and the still mourned Glasslands (photos). Luckily, Rough Trade is a fantastic music venue with superior sound and great viewpoints wherever you are – but I was right in front, to not only hear the music but being fully immersed in it.

It’s great joy to see the four from Chicago play their instruments and music. Here’s a band that does it not for fame and money, but one can tell they’re doing it because… this is it! They simply have to make and perform music! The sound that Disappears put out can best be described as “eclectic”. It’s certainly not for everyone and one might be hard pressed to find any of their albums on the billboard charts any time soon. It’s guitar driven, high energy, noisy sound with crazy awesome drums, talent and creativity overload all around.

To get an idea what the show on Saturday was like, watch here a snippet:

I find the KEXP session highly enjoyable because they really go into the heart of the matter and show how music is being performed: just musicians performing, no gimmicks no distractions. This is a recording from May 2014.

After the show, I asked Jonathan if I could have the set list, and he agreed to it with a killer smile. Later, I had the chance to chat a bit with him and also Brian, and kudos to them for being approachable and down-to-earth. They’re scheduled to coming back to New York in late Summer or early Fall and while I don’t want to rush through my favorite seasons, I am looking forward to seeing Disappears again by then.