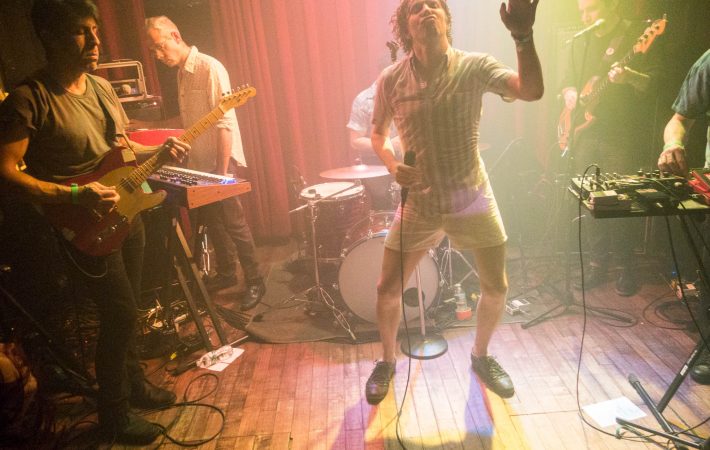 There’s a special vibe in the air that Friday evening close to 9 o’ clock at  Brooklyn’s Union Pool, a pretty popular hangout and pick-up spot especially in the Summer time with its spacious backyard, romantic lighting, outdoors bar and taco truck (not necessarily in that order). Among the usual weekend crowd were music fans, anticipating the third consecutive show in a row of four shows by no other than !!! or !!! (chk chk chk) (pronounced ([/tʃk.tʃk.tʃk/]) as they usually go by.

How come that a veteran band like those five guys from Sacramenta, California would play such a small venue like Union Pool? Turns out, !!! (chk chk chk) were about to test new material and there’s hardly a more scenic venue than Union Pool! I couldn’t believe my luck when early January, I checked out my favorite venues’ music calendar and found !!! (chk chk chk) performing live. gasp I was even able to still get tickets – but that Friday night at Union Pool I learned that many fans did not, and many came to just hang out, and maybe get a sound bite from the show inside from the adjacent bathroom (from where one can listen into the live bands on stage, without any visuals though of course).

Despite or maybe even because of the special vibe that evening, I came to talk with a fellow music lover and we just kept on going, until shortly before 10:00 PM, when we decided to change from the front room bar to the back room music venue. Much to my delight, !!! (chk chk chk) were about to start just then.

Nic Offer, Mario Andreoni, Dan Gorman, Allan Wilson, Paul Quattrone and Rafael Cohen  started with a bang! Nic, clothed in his often used style of shirt and shorts (or swim wear, or were these really just boxer shorts or in other words underwear?) took the stage and made it his. The Union Pool stage is small, and can barely hold five people yet they made it work. The lights around the stage, frame the whole performance space nicely and hold the scenery together. Not though for Nic Offer who repeatedly walked out of the frame aka stage and into the audience. He wandered around, swinging hips with this couple and then that, never stopping a beat and continuing to sing.

The appreciative crowd was pleased. The whole floor buzzed. Everybody seemed to have a good time. Scratch that. A GREAT time! This show was one big party with all new – and my I say it? – really cool new material. No one seemed to mind that the sound wasn’t familiar. It was upbeat and catchy, and that’s what ultimately counts. At one point during the show, when Nic was leaving the stage again, he wandered of to the bar, jumped on it and appeared to hold grip on the chandelier above. Is he really swinging from it? We held our breaths! Luckily, he spared us and himself the outcome of such an endeavor and danced back on stage again. So much energy! So much joy in playing this intimate venue. The audience thanked the band, and the band acknowledged it as well with two familiar songs during their encore. By then, it was long after midnight and the  weekend DJ ready to take over.

Much to many fans’ delight, the band hang out after the show for quite some time, chatting and keeping the high energy up. I very much enjoyed my chat with Nic, where he once again confirmed that Friday night’s material -and the songs of all four shows- might never be used for any official recording or maybe some of the songs might. Time will tell and I’m definitely looking forward to !!! (chk chk chk)’s next recording and will catch them live again as soon as possible.