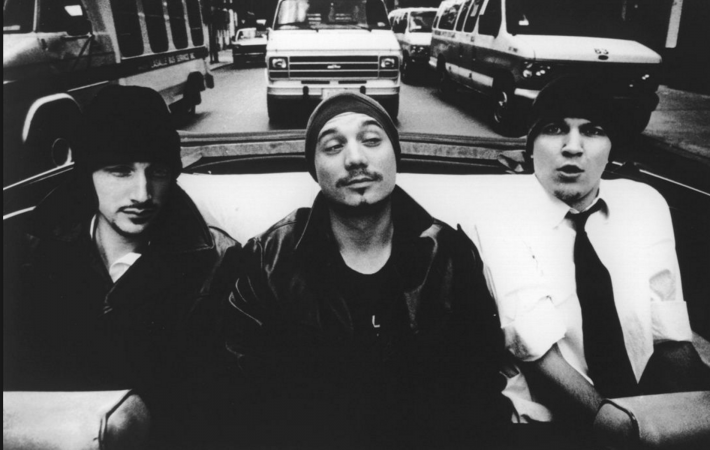 This article in the 3IsABand series could be as well in the Live Soundtrack series, since it’s quite the “Throwback Thursday”, given the fact that the band’s first studio album came out in 1996. I picked the CD up at the Times Square Virgin Mega Store on my trip to New York City and for me -back then- it represented a big piece of  New York. Little did I know, back then, how spot-on the three were!

Huey Morgan (vocals, guitar), Brian Fast Leiser (keys, bass, horns, harp, melodica, programming, vocals) and Frank Benbini (drums, percussion, vocals) really knew what they were singing about, and they did it in a -back then anyway- very unique fashion!

While their first album was really good, and put them on the map, the real gem for me is their 2nd album, 100% Columbian. On that album, they become even more comfortable with mixing styles as seemingly as incompatible as rap with funk, hip-hop with hard rock guitars, wrapped into hooky, pop-melodies.

Re-listening to these two albums makes me instantly remember, why I loved them in the first place. The only time I ever saw them live was in 1999 in Munich: The venue was sold out, probably over capacity, because people were passing out and carried outside. The atmosphere was sweaty, hot and a little sleazy – just right up the alley to the sound of Hue’s guitar and sexy voice…

To my (big) surprise they are still around, albeit with slight changes to their original set-up.

Still active! Screengrab from Fun Lovin’ Criminal’s Instagram (yep, they have that too!). Sadly, they partied in London’s Brooklyn Bowl and not ours here in… Brooklyn.