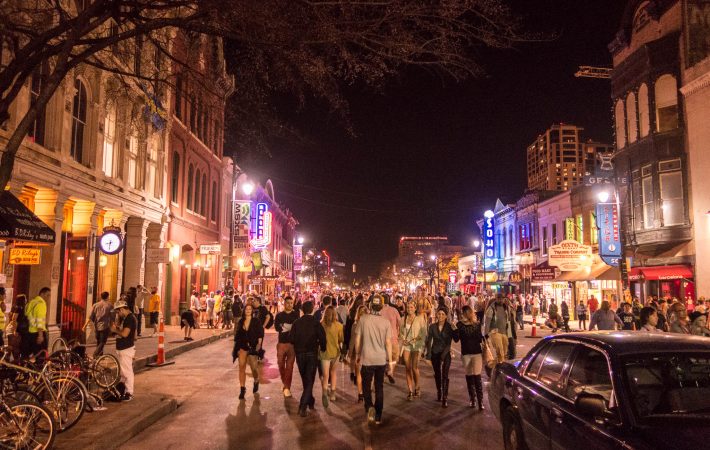 After Delta changed our flights from a comfy direct to one that takes off at 6 am and includes a layover in Atlanta, we knew this would be a long day. We arrived in Austin around noon (including a one hour time difference), but could fortunately check into our hotel right away and pick up the badges at the nearby conference center.

From there, the madness started: we went to lunch to a random bar, Darwin’s on E 6th, (which has very nice service, an excellent home-made salsa and decent gyros), listened to the band, playing across the street and watched another band setting up at a stage in the corner of Darwin’s. They, Open Air Stereo, turned out to be our first SX show. Not bad at all: straight-forward rock with good songs to sing along. On the way home, we wanted to find out, if we need wristbands for seeing shows at the Hype Hotel, a joint showcase by several cutting edge music blogs and yes, we do for the day shows (just stand in this two-block-long line on the other side of the street). The night shows, though, require badges. That’s SXSW: a mixture of official and unofficial showcases, with varying requirements for credentials and online RSVPs. Thorough preparation is mandatory here.

First band in the evening was Weeknight from Brooklyn at Headhunters, a dive-y tiki bar on Red River Street with room for maybe 30 people. They are some sort of reverse boy-girl duo: she operates the machines and drums, while he sings most parts and play guitar. Brilliant – we have to see them again at home.

Next on list was Polytype from Utah at The Iron Bear. They could have been from Brooklyn as well: mixing skillfully electronics with guitar and bass into catchy songs.

After chilling at Buffalo Billiard while watching Wardell and Catch a Ghost, it was time for the first must-see show: Banks at Haven, starting midnight. Smartly, we were there 40 minutes early and had to stand in line for exactly that time to get in to a stuffed nightclub without A/C. It was hot, miserable and no way to get close enough to take some decent photos. But Banks was fabulous: she’s accompanied by a guitarist/keyboarder and a drummer, which gives the show the exact right amount of authenticity. Banks herself, while looking like an aloof diva on official photos, is a sweetheart who was genuinely excited to play SX, even though the sound broke down a couple of times, leaving the audience with just the muted sound of the high hats. She’ll become a star, if she wants or not. We called it a night around 1 am, but there was no sign that the debauchery on Austin’s streets would abate anytime soon: there was still live music to hear at various places. Now, let’s get ready for day two.